Special Agent James W. Peaco III graduated from US Naval Academy with a Bachelor’s of Science degree in Political Science and served in US Marine Corps as an officer. He joined the FBI in 1998 and his assignments included violent crimes/criminal enterprise squad that targeted street gangs in Los Angeles. SA Peaco also served as an operator on the FBI Los Angeles Special Weapons and tactics Team from 1999-2012.

SA Peaco was certified as a FBI Weapons of Mass Destruction (WMD) Coordinator in 2012 and is currently the FBI Los Angeles Division WMD Coordinator. He is responsible for WMD threat assessments, outreach and liaison programs that prevent and provide early detection against WMD terrorism, and preparedness for WMD terrorism and terrorism threats. SA Peaco also focuses on rapid threat assessments, interagency operations, and Radiological Nuclear Search Operations. He has also participated in several National Level Special Events and exercises and has provided WMD training to international partners in the Balkans, Africa and Asia. 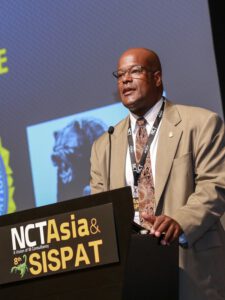