Natividad Carpintero-Santamaria is Professor at the Department of Energy Engineering, Area of Nuclear Engineering at the Industrial Engineering College (ETSII) of the Polytechnic University of Madrid (UPM) and General Secretary of the Instituto de Fusión Nuclear “Guillermo Velarde”.  She is one of the eight members of the Presidium of the European Academy of Sciences which counts among its academicians more than fifty Nobel Prizes. She is also a university expert in Energy Markets and holds a Diploma in High Studies of Defence and a Diploma as University Expert in Transnational Crime and Security. She holds a Master’s in Criminology and Psychology of Terrorism, and she is a specialist in Prevention and Integral Self-Defence for Women. In 1991 the Spanish Royal Academy of Sciences awarded her with the Alfonso XIII Prize.

Former member of the Consulting Board of the International Working Group of the G8 Global Partnership and NATO Workshops in Nuclear Security, she authored the book “The Atom Bomb: The Human Factor during Second War World” (Díaz de Santos, 2007) and co-edited with professor chair of Nuclear Physics Guillermo Velarde the book “Inertial Confinement Nuclear Fusion: A Historical Approach by its Pioneers” (Foxwell and Davies, 2007) considered as recommended reading by the EUROfusion Consortium of the European Commission. She has been granted with the Cross for Aeronautical Merit with White Distinctive; Cross for Military Merit with White Distinctive; Medal of the Polytechnic University of Madrid and the Medal of the European Academy of Sciences.

She has represented the Spanish government before the International Atomic Energy Agency (IAEA). 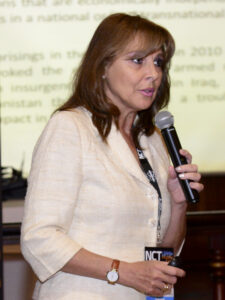