Colonel Kassebaum is a 2003 graduate of the University of Florida where he earned his Doctor of Pharmacy degree. He received a direct commission into the United States Army as a Pharmacy Officer (67E) in the Medical Service Corps in August 2003.

Upon completion of the Army Medical Department Officer Basic Course, he was assigned to Madigan Army Medical Center at Fort Lewis, WA where he completed his pharmacy practice residency. He applied that foundational experience in assignments of increasing complexity and responsibility within pharmacies at Fort Gordon, GA; Fort Leonard Wood, MO; Fort Campbell, KY; Fort Knox, KY; Joint Base Lewis-McChord; and Landstuhl, Germany. He earned board certification in pharmacotherapy in 2005. During his assignment to Fort Leonard Wood in 2009, he deployed with the 47th Combat Support Hospital to Mosul, Iraq where he completed a 10-month tour as Chief, Pharmacy Services.

From 2014-2016 he completed a broadening assignment at Human Resources Command where he served as Assignment Officer for 67E/F/G & 71A/B/E/F officers. COL Kassebaum commanded the Fort Lee Medical Department Activity and Kenner Army Health Clinic from 2017-2019. He is grateful to have had the privilege of leading nearly 500 staff in their mission to enhance Soldier and medical force readiness through the delivery of exceptional and compassionate patient-centered care to the Fort Lee community. Following battalion-level command, he served as Chief, Department of Pharmacy at Landstuhl Regional Medical Center and Regional Health Command Europe Pharmacy Consultant from 2019-2022. 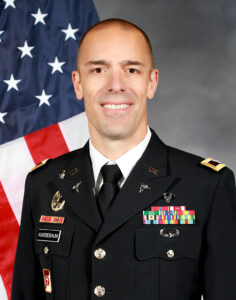