Head of the EOD department, Federal Department of Civil Protection, Bosnia and Herzegovina

Sead Vrana is born 1975 in Sarajevo, Bosnia and Herzegovina. His basic education, aeronautical engineering, was interrupted by the War in Bosnia and Herzegovina 1992-1995 which he spent as a soldier in the Army of Bosnia and Herzegovina on several duties related to mine laying/lifting and demolitions. He graduated on Philosophical faculty in Sarajevo and obtained master degree in the International program on the University La Sapienca of Rome. His career in the field of the explosive ordnance disposal started in 1999. in the Ministry of Defense Civil Protection Sector where he obtained duty of the documentation/intelligence officer. Since 2007 he is a head of the Explosive Ordnance Disposal department in the Federal Administration of Civil Protection. He is a IMAS Level 3+ technician focused on the depleted uranium clearance and residual aircraft bomb management in urban surrounding. He published several papers related to the residual unexploded bombs management and risk assessment. 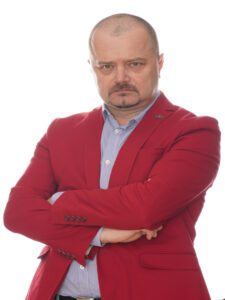