Mr. Michael A. Collins joined JTF-CS as the Chief of Staff in August 2006 as a U.S. Navy Captain, then transitioned to a Department of the U.S. Air Force civilian. In March 2015, Mr. Collins was assigned as the Deputy to the Commander. Headquartered at Fort Eustis in Newport News, Va., JTF-CS is assigned to U.S. Northern Command (USNORTHCOM) and is focused on chemical, biological, radiological and nuclear (CBRN) consequence management planning, preparedness and command and control of Department of Defense (DOD) forces during CBRN incidents.

Collins graduated from Loyola University of New Orleans in 1981 with a degree in Computer Science, and received his commission from Tulane University NROTC. He received his wings as a Naval Flight Officer in July 1982 and subsequently completed training in the EA-6B Prowler aircraft at VAQ-129, the EA-6B Fleet Replacement Squadron (FRS). His command tours include VAQ-140, VAQ-129, Naval Support Activity, Norfolk, VA, and Regional Support Services for the Mid-Atlantic Region. Collins retired from the Navy in August 2010. 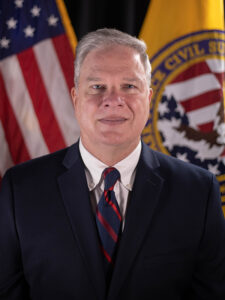