On August 21, 2019, Director Christopher Wray appointed Donald Alway to the position of Assistant Director (AD), Weapons of Mass Destruction Directorate (WMDD). Mr. Alway had most recently served as the AD, Training Division since April 2018.
Mr. Alway began his career as a Special Agent with the FBI in 1996. He was first assigned to the Los Angeles Division, where he investigated Columbian and Mexican drug trafficking organizations. He served on several specialized teams and assisted at both New York and Washington, DC 9/11 crime scenes.
In 2003, he was promoted to Supervisory Special Agent in the Counterterrorism Division at FBIHQ. In 2005, Mr. Alway served as a Deputy-On-Scene Commander in the Iraq Theatre of Operations for the Regime Crimes Task Force, where he investigated the former Iraqi government under Saddam Hussein. Mr. Alway remained in Qatar to serve as Acting Legal Attaché, and assisted in the joint investigation related to the bombing of the British Players Theatre. In 2006, he was promoted to Unit Chief of the WMD Integration and Targeting Unit, Counterterrorism Division.
In 2007, Mr. Alway transferred to the New York Division, where he supervised a Joint Terrorism Task Force squad responsible for terrorism, WMD, and bombing investigations. His squad was also responsible for specialized response and special event planning. In 2011, he was promoted to Assistant Special Agent in Charge of the Cincinnati Division, where he led the National Security Branch. In 2012, Mr. Alway was named Section Chief of the Investigations and Operations Section in the WMDD. In 2014, he was named Special Agent in Charge of the Jackson Division, where he led the FBI’s efforts for the State of Mississippi until his promotion to Deputy Assistant Director, Training Division in 2016. Mr. Alway is a proud graduate of the FBI National Academy, the FBI National Executive Institute, and the Department of Homeland Security Executive Leadership Program located at the Naval Postgraduate School. He is the recipient of the 2009 Director’s Award for his support of the Integrity and Compliance Program.
Mr. Alway received a Bachelor’s Degree in Public Administration from the University of Southern California, a Master’s Degree in Criminal Justice from the California State University at Long Beach, and a Master of Science Degree in Strategic Studies in Weapons of Mass Destruction from the Indiana University of Pennsylvania. Prior to joining the FBI, Mr. Alway served as a Deputy Sheriff for the Los Angeles County Sheriff’s Department. 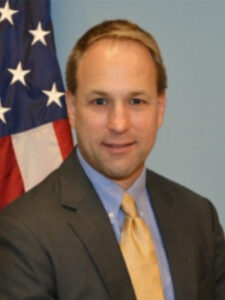