Mr. Darryl Colvin is the Joint Program Executive Officer for Chemical, Biological, Radiological and Nuclear Defense. In this role, Mr. Colvin leads civilian and military multi-disciplinary teams whose mission is to protect the U.S. Joint Forces and nation from chemical, biological, radiological and nuclear (CBRN) threats by generating affordable and state-of-the-art capabilities.
Prior to this position, Mr. Colvin served as the Deputy Program Executive Officer (PEO) Missiles and Space, Acting Deputy PEO for Missiles and Space, Acting Deputy PEO Soldier, and Deputy for Acquisition and Systems Management for PEO Missiles and Space. Prior to that he was the Project Manager Ground-based Midcourse Defense Interceptor for the Missile Defense Agency. Mr. Colvin also served as Project Manager for the Lower Tier Project Office for the PEO Missiles and Space, Redstone Arsenal, AL.
Mr. Colvin served in a variety of Ordnance, Acquisition, and Research and Development assignments. His prior acquisition assignments include: Operations and Integration Officer for the Army Tactical Operations Center Product Office; Product Manager for Field Artillery Launchers; Department of the Army Systems Coordinator for the Army Tactical Missile System; Executive Officer to the Deputy for Systems Management, Office of the Assistant Secretary of the Army for Acquisition, Logistics and Technology; and Close Combat Armaments Research and Development Coordinator at Benet Laboratories.
Mr. Colvin served as an Assistant Professor at the United States Military Academy at West Point where he taught Mechanical Engineering Design, Weapon Systems Design, and Capstone Design.
Mr. Colvin entered the Army through the University of Missouri at Rolla ROTC Program in 1985 where he was commissioned as an Ordnance Second Lieutenant. Mr. Colvin retired as a Lieutenant Colonel in January 2006 after faithfully and proudly serving 20 years active duty to the nation.
Mr. Colvin is a member of the Army Acquisition Corps and is Level III Certified in Program Management, International Program Management, and Systems Planning, Research, Development and Engineering – Science and Technology career fields. Mr. Colvin earned a Master of Science Degree in Metallurgical Engineering from the Colorado School of Mines and a Bachelor of Science Degree in Mining Engineering from the University of Missouri at Rolla. Mr. Colvin completed numerous leadership courses, including the Army Command and General Staff College and the Senior Service College Fellowship Program.
His civilian and military awards and decorations include the Decoration for Exceptional Civilian Service Award, the Superior Civilian Service Award, Commander’s Award for Civilian Service, Legion of Merit, Meritorious Service Medal with Oak Leaf Cluster, the Army Commendation Medal with Oak Leaf Cluster and Army Achievement Medal with Oak Leaf Cluster. 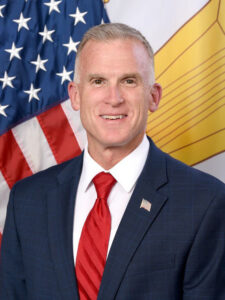