Assistant Inspector General of Police Shafqat Malik S.St has commanded Bomb Disposal Unit of KPK province in Pakistan which is spread over 35 districts neighbouring Afghanistan for thirteen years. The officer is a qualified EOD and forensic expert from FBI, AFP and Scotland Yard. He is also a notified expert on Ballistic, forensic and EOD for prosecution in Pakistan and has endorsed legal opinion on 5153 cases in Anti Terrorism Courts due to which many terrorists have been convicted. He participated in many counter terrorism operations with law enforcement agencies. He actively took part by clearing IEDS, defusing suicide bombers and provided vital forensic evidences to track the terrorist group and their signature. Some of these high profiled operations include the attack on the American consulate Peshawar, Army Public School and College Peshawar, Bacha Khan University, Pakistan Airforce Base Badaber and Hayatabad operation in Peshawar. Most of the time he was the first responder like during Church attacks in Peshawar, the jail break of DI Khan by TTP, the assassination of Benazir Bhutto, the Marriot attack in Islamabadand many other attacks.

The officer served as a forensics and explosives expert in Federal Investigation Agency. He has also served in Pakistan Army for twenty years as a commissioned officer.

AIG Malik graduated in Ballistics, Explosives, arms and ammunition. He has vast experience in post-blast investigation and forensic exploitation of IEDs. He formulated Pakistan’s counter-IED strategy and has been working with the FBI, the UN, Scotland Yard and AFP on a case-by-case basis. He has also raised the first training institute on EOD for KP Police and commanded it for three years. He has also been invited by AFP, IB Consultancy, FBI and Scotland Yard as a guest speaker for various conferences.

A documentary titled Armed With Faith has been made on General Malik and his Bomb Disposal Unit which has won the Emmy Award in 2019. In recognition of his sacrifices and meritorious services in the war against terrorism, President of Pakistan conferred him the Sitara-E-Shujaat – S.St (Star Of Bravery). 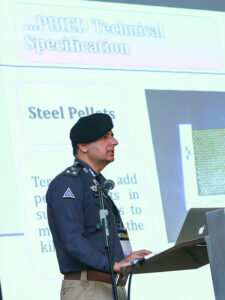