Major Gkanalas is an active-duty EOD/IEDD/CBRNe SME, serving in the Hellenic Air Force (HAF) for the last 30 years. He graduated from HAF’s NCO Academy in 1992 as a General Armorer and he volunteered to attend HAF’s EOD School in 1997 and ever since has entered the EOD Community.

He worked as Ordnance loader and Weapons Maintainer on F-4E aircraft and F-16C/D Blk 52+Adv. At the time being he’s the EOD Head of 116Combat Wing as well as the Ammunition – Explosives QA Officer of the Air Base.

He graduated from US NAVSCOLEOD, Eglin AFB, FL in 2009 and he has participated in many training and operational missions (USA, Israel, Thailand, UK, Slovakia etc,).

Major Gkanalas is a frequent participant in various related webinars, conventions and expos and he has extensive experience as trainer and speaker.

He lives with his wife and two daughters in the town of Patras at the South – West of Greece, near the birthplace of the Olympic Games. 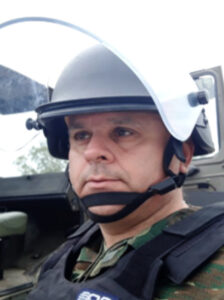