MAJ (OF-3) Garceau is currently serving as the Neutralization Section Chief for the Defeat the Device Branch at the NATO Counter IED Center of Excellence located in Madrid, Spain. She earned her commission as a second Lieutenant in the United States Army in 2004 at Fort Benning, GA, and was selected for the Ordnance Corps. Since graduating NAVSCHOL EOD in 2005 as an Explosive Ordnance Disposal Officer, her previous assignments have included serving as the Provisional Battalion Commander for the 184th EOD Battalion, S3 for the 52nd Ordnance Group (EOD), Executive Officer for the Warrior Transition Battalion at Brooke Army Medical Center, S3 for the 111th Ordnance Group (EOD), Company Commander of the 641st Ordnance Company (EOD), Executive Officer for the 761st Ordnance Company (EOD), and Platoon Leader for the 759th Ordnance Company (EOD). 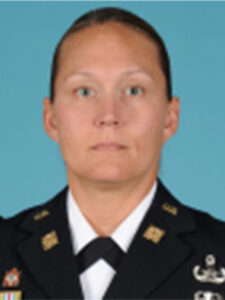