Major Bruno Ferrandes is an officer of the Italian Army. He joined the army in 1997 as a paratrooper corporal and served for about a year in the city of Siena, in Tuscany. In 1998 he became a non-commissioned officer and after the course at the Academy of NCOs he was transferred to the Mountain Troop Regiment of north-western Italy. During this time, he was deployed twice in ISAF operations in Afghanistan and once in Bosnia as a platoon commander. In 2007 he became an Officer and was transferred to the CBRN School of Rieti in central Italy. Here he headed the CBRN company and was employed in the CBRN activities. He has also been deployed twice in Afghanistan as CBRN specialist. In September 2020 he joined CBRN COE as Section Chief of the Defence Planning and Capability Development Section. He is a lover of good food, loves cooking and lives in Vyskov (CZE) with his wife. 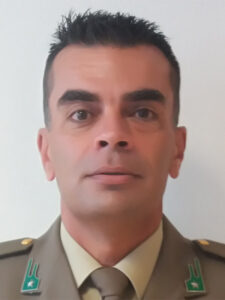