Lt. Colonel Mathew D. Woolums is assigned to the Joint Force Headquarters New York, Latham, NY as Director of Plans and Programs in a drilling status capacity. In this position, he integrates planning efforts for Civil Support Operations for 5 Wings across NYS to ensure synchronization and continuity of efforts between ANG and ARNG forces during state emergencies. In a full-time capacity, Lt Colonel Woolums works for the National Guard Bureau (NGB) Combating Weapons of Mass Destruction (WMD) Division as a Subject Matter Expert and Interagency Liaison, ensuring the 57 WMD-CSTs are properly trained and resourced to execute their statutory mission.

Lt Colonel Woolums enlisted in the United States Air Force in 1992 and was assigned to the 703rd Munitions Support Squadron, Volkel Air Base, The Netherlands. In 1998, while assigned to Elmendorf AFB, AK, he was selected as a recipient of a Scholarship for Outstanding Airmen to ROTC and subsequently accepted to The Pennsylvania State University, where he attended ROTC. Lt Colonel Woolums was commissioned in 2001 and has since held multiple base and headquarters–level positions. He has served as Flight Chief, twice as Section Commander and been assigned as Combat Search and Rescue planner and controller for USPACOM. Lt Colonel Woolums commanded a jointly manned Weapons of Mass Destruction Civil Support Team (WMD-CST) where he oversaw hundreds of missions, to include several National Special Security Events and emergency responses, most notably the response to the April 2013 Boston Marathon bombing. From there he was selected as Program Manager on the NGB Joint Staff for the 57 WMD-CSTs responsible for the oversight of over $1B in resources. Prior to his current assignment, Lt Col Woolums served as Deputy Commander, 109th Mission Support Group, Scotia, NY. 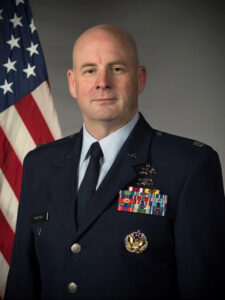