LTC Alexander Hugyar has been serving in the armed forces of the Slovak republic for over 29 years. His speciality includes studies at the University of Chemistry in Pardubice, Czech Republic and he is improving his knowledge by PhD study at the Security and Defence Department, Military Academy of General Milan Rastislav Stefanik, Slovakia. During his military carrier he experienced various NCO’s and officer’s positions e.g. company, technician, Weapons and Ammunition officer, national EOD Education and Training branch Head. LTC Hugyar is fully trained as an EOD operator and EOD staff officer. He completed two tours in Afghanistan as a combat engineer unit commander and as a senior officer of the training branch at the Task Force Paladin formation. Since 2011, LTC Hugyar has been posted to conduct several NATO EOD COE positions duties. His current assignment covers the Head of Department, Education and Training at the NATO EOD COE. 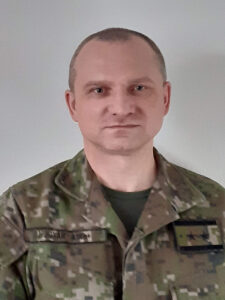