LTC Joseph Kopcha enlisted in the United States Army in 1994 and was commissioned through Officer Candidate School in 2004. Since July 2016, he has been assigned as the Strategic CBRN Planner at Supreme Headquarters Allied Powers Europe (SHAPE), Allied Command Operations (ACO) HQs, in Mons, Belgium. In addition, he serves as the NATO Joint CBRN Defence Capability Development Group (JCBRND-CDG) Secretary while also serving as the Vice Chair for NATO’s JCBRND-CDG Doctrine and Terminology Panel (DTP). He is also a member of both the Knowledge Management Panel (KMP) and Detection, Identification, and Monitoring Panel (DIMP).

From 2014 to 2016, LTC Kopcha served as a Battalion Executive Officer for the Headquarters and Headquarters Battalion (HHBN), 1st Armored Division at Fort Bliss, TX. From 2011 to 2013, Kopcha was assigned to the 5th Special Forces Group (Airborne) at Fort Campbell, Kentucky. His areas of expertise covered CBRN Defence and he was instrumental in preparing the 5th SFG(A) Command Group, Staff and Operators prior to activities near Syria. LTC Kopcha has also served as a BN CBRN Officer for 1-32 Infantry Battalion, 10th Mountain Division, and served a 16-month combat tour in Kunar Province, AFG. 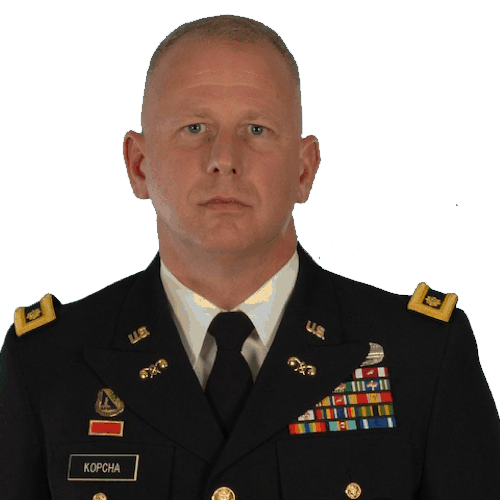