In 1998 joined the military forces at 1./FlaRakGrp 33 (missile defense).  Changed the branch from Airforce to Army, CBRN Defense. 1999-2001 Military education and juniors officers training. In 2001-2002 attended officers school in Dresden. 2002-2006 University in HAMBURG – studies in History. 2006-2007 light CBRNDef Coy 110, dep CoyCom. In 2007-2008 Josef Oswald was CD & instructor at CBRNDef School. In 2008-2012 CoyCdr 3./CBRNDefRgt 750, during that I was deployed as INTEL Offc of the ORF Bn iccw US Forces in the northern part of KOS. In 2012-2016 became CD & instructor for the junior officers course CBRN in SONTHOFEN. 2016-2018 NATO School Oberammergau Course Director and certified Instructor PROTECTION-/JOINT PLANS OPERATIONS – Department. In 2019-2020 S3 StaffOffc at CBRNBn 750 „BADEN“, during that successful visit of the training as a DEU National tactics and logistics instructor. Since February 2021 back at Natoschool as DDD SET Department, Course Director, Instructor and Evaluator for the NATO Certified Instructor Program. 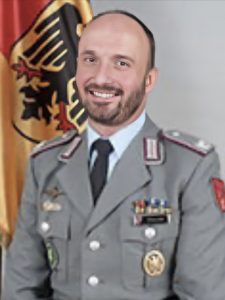