Head of the Operational Division at the Haut Rhin Fire Brigade

Lt. Col. Denis Giordan has served as a Fire Officer for 28 years. He currently is the Head of the Operational Division at the Haut Rhin Fire Brigade. He is also the Head of the “Radioprotection and RN risks and threats” Teachers Team at the French National Fire Officers School (E.N.S.O.S.P). Furthermore, he is a Nuclear and Radiological advisor of the French East Civil Defence Zone. Lt. Col. Giordan is a member of the CBRN Commission of the French National Fire Fighters Federation. He is the French Representative in the Hazmat Commission of the International Association of Fire and Rescue Services. He teaches a “CBRN risks and threats” course at the High Alsace University. He holds a Master’s degree in Nuclear Sciences and Technics and has obtained other academic qualifications from notable French universities. 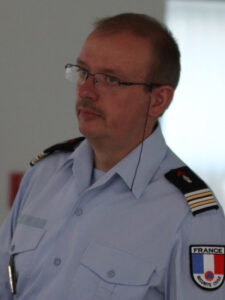