The current Commander of the 1st CBRN Defense Battalion (1st CBRN Batt) comes from the Brazilian Army Artillery Corps, class of 1999 of the Agulhas Negras Military Academy.
He was ascended to the current rank on April 30, 2019.
In addition to the Lieutenants and Captains Career Courses and to the Command and General Staff Course, Lt.Col. Anderson Wallace is an expert in CBRN Defense, held at the Specialized Instruction School, in 2003.
After completing the specialization course, he was classified in the Chemical, Biological and Nuclear Defense Company, currently the 1st CBRN Batt; serving from 2003 to 2006 as Commander of Recon and Decon Platoons; Operations Officer; and Deputy Commander.
He was Chief Instructor of the CBRN Defense courses at the School of Specialized Instruction from 2010 to 2013.
He carried out courses and military exchanges in the CBRN area, in member countries of the North Atlantic Treaty Organization (NATO) – such as the Portuguese Army, the Spanish Army, the British Royal Air Force and the Serbian Armed Forces – in addition to participating in training at international disarmament and non-proliferation CBRN organizations – such as the International Atomic Energy Agency (IAEA) and the Organization for the Prohibition of Chemical Weapons (OPCW).
Lt.Col. Anderson Wallace is a member of the United Nations (UN) CBRN Terrorism Specialist Network, having participated in the development of the “MODULE 6: The International Legal Framework Against CBRN Terrorism” at the Austrian UN headquarters in Vienna.

The 1st CBRN Batt Commander participated in the conception and development of the Brazilian Army’s CBRN Defense System Restructuring Project, under the direction of the Army General Staff.
He was CBRN Advisor at the Center for the Coordination of Prevention and Combat of Terrorism (CCPCT) during Major International Events held in Brazil, such as the 2013 Confederations Cup and the 2014 Football World Cup.
Lt.Col. Anderson Wallace was the Commander of the CBRN Defense Company (CBRN Coy) at the Special Operations Command (Brazilian Army’s SOF), having employed that Military Organization during the 2014 FIFA Cup and planned its operation for the Rio 2016 Olympic Games.
Among the main functions performed as General Staff officer, he was the Deputy Chief of the Logistics Operations Coordination Center of the 12th Military Region (Manaus-AM), Office Assistant to the Military Commander of the North (Belém-PA) and Training Officer of that Operative Command. All of these commissions took place in the Brazilian Amazon operational environment.
The 1st CBRN Batt Commander holds a Master’s degree (MSc) in Military Sciences from the Army Command and General Staff School, with research work on CBRN Defense.
Of the decorations with which he was awarded, the Silver Command Badge and the Medals of the Peacemaker, Marshal Trompowsky, of the Corps of Troop and the Amazon Service stand out. 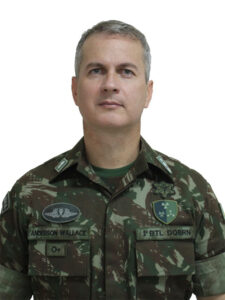