Lieutenant Alvaro Toñanez is a career Firefighter/Paramedic with the Miami Dade Fire Rescue Department for the last 25 years. He is currently serving in the Special Operations Division as the Training Officer and Exercise planner for the Hazardous Materials Team where he oversees training for more than 300 HazMat Technicians. He is responsible for developing both local and regional exercises to counter new and uprising HAZMAT/ CBRNE threats by testing lessons learned and measuring response effectiveness.

Alvaro Toñanez started his carrier in the CBRNE field when he was deployed as a U.S. Marine to Operation Desert Storm as part of the NBC team for Task Force Papa Bear/ 1st Marine Division.

He is also a member of the Florida Task Force 1/ USAR team where he holds the position of HazMat Manager for the Blue Team. He has responded to multiple disasters throughout the country including the World Trade Center collapse in NYC, Hurricane Harvey in South Texas and the Earthquake in Port Au-Prince, Haiti.

Through his career Lt. Tonanez has attended and obtained multiple certification courses to include : 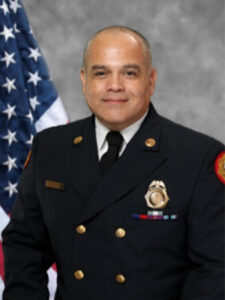