Mirko Šundov, born on 15 January 1962, is a retired Croatian general with a PhD in the field of Geo-sciences who served as Chief of Staff of Armed Forces of Croatia from 2016 to 2020. After graduation in 1986, Šundov started working as a Special Advisor in the Croatian Territorial Defense HQs in Split. He was appointed as a commander of the 4th Brigade of the National Guard. Šundov then served as a Commandant of the War College Ban Josip Jelačić where he was also a lecturer on Military Strategy and Operations module. After his PhD, he enrolled in several UN courses in Helsinki as well as NATO defence college in Rome. He was also a Military Representative of Croatia to NATO and the EU and Inspector General of Defense of Croatia. During his service time, Šundov was awarded 12 Croatian and international decorations. Today he works as a chief strategic advisor at DOK-ING. 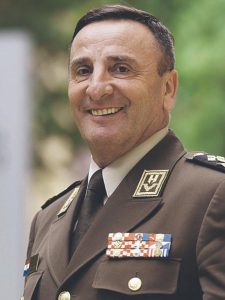