Edoardo Cavalieri d’Oro works in the role of Lieutenant Colonel for the Italian National Fire and Rescue Services since 2004 and is heading the CBRN unit in the region of Lombardy from the Milan headquarters since 2013. Edoardo, graduated in nuclear engineering at the Polytechnic of Milan and then specialized at the Massachusetts Institute of Technology in the areas of risk assessment, applied to nuclear non-proliferation, and of management and system design. In addition, he received a Master’s degree in Civil Protection against CBRN events at Tor Vergata University in Rome. In addition to the tasks related to the CBRN, from 2018 he holds the position of national coordinator for the INSARAG activities of the Heavy USAR team certified at the end of 2018. Edoardo has participated in various missions including the earthquake in central Italy in 2016 and that of Emilia in 2012, as well as the two recent accidents in 2018 of the Genoa Bridge and the explosion on the Bologna overpass. Edoardo is the author of various publications in the field of risk assessment, CBRN and of the use of rescue technologies, including the system called SFM for emergency response in CBRN events through IoT systems financed by a European Space Agency feasibility study and currently in development phase. 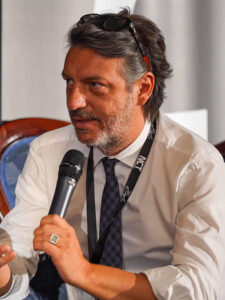