Dr. Ron Hann, a member of the Senior Executive Service (SES), is Acting Director, Research and Development Directorate (RD) for the Defense Threat Reduction Agency (DTRA), located on Fort Belvoir, Va. DTRA enables the Department of Defense (DoD) and U.S. Government to prepare for and combat weapons of mass destruction (WMD) and emerging threats and to ensure nuclear deterrence. Dr. Hann oversees an innovative science and technology directorate, comprised of military and civilian personnel, who execute research, development, test, and evaluation activities for the Agency. Activities include collaboration with industry, research universities, and other agencies within the U.S. Government to develop capabilities to detect, deter, and defeat WMD in support of our warfighters.

Prior to assuming his current position, Dr. Hann served as Director, RD Chemical and Biological Technologies Department, which addresses the threats posed by chemical and biological weapons. Dr. Hann also serves as Director for the Joint Science and Technology Office, a component of the Chemical and Biological Defense Program, which was established by Congress in 2003 and tasked to coordinate, integrate, execute, and transition DoD chemical and biological science and technology medical and nonmedical programs. Dr. Hann’s first military tour with DTRA was in 2002, where he was assigned as a mission commander to the Chemical and Biological Division, On-Site Inspection Directorate. In this role, he led over 20 sensitive inspections at U.S. chemical storage and destruction facilities, in cooperation with the Organisation for the Prohibition of Chemical Weapons. He also helped train, equip, deploy, and lead site exploitation teams in Iraq in the search for evidence of Saddam Hussein’s WMD program. He was promoted to the SES Corps in April 2014. Dr. Hann retired from the U.S. Army Chemical Corps, after almost 27 years of active duty service. Assignments included command and staff positions ranging from Regimental Chemical Officer and Squadron Operations Officer at 2nd Armored Cavalry Regiment to Company Commander of the U.S. Army Recruiting Command. He is a combat veteran of Operation Desert Shield/Desert Storm and Operation Iraqi Freedom. He also served in the NATO peacekeeping mission in Bosnia-Herzegovina as part of Operation Joint Forge. 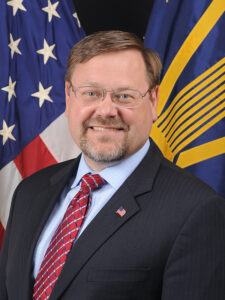