DIG Waruna Jayasundara has an impressive international background, also Attorney at Law, and has previously held Director-level roles in e.g., DIG in charge of the Western Province (North) Range and Uva Range, Counter Terrorism & Investigations Division as well as served STF for over 16 years in the fields of Counter Terrorism and Counter Crime operations.

DIG Jayasundara has also served in the UNMISS as an Information Analyst 2013-2014. Attended as a guest speaker at the INTERPOL NEXUS Initiative Working Group Meeting in Lisbon, Portugal 2019, at the Ministerial Level Countering Violent Extremism Summit in Astana, Kazakhstan 2015, and at the South Asian Counter Terrorism workshop held for the regional Police officers in Colombo 2013. Furthermore, he represented the Sri Lankan delegation at the meeting of the Working Group on Governance, Rule of Law and Human Rights at the European Union Joint Commission in Sri Lanka 2015-2017.

DIG Jayasundara has also been awarded a diploma for Intelligence in Combating Terrorism Course at the US Army Intelligence School, Fort Huachuca, Arizona, USA 2004. 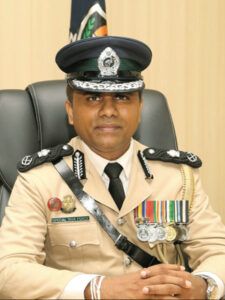