CPT Martin Klusacek enlisted in the Czech Armed Forces in 2002 (EOD qualified since 2009). He earned a Master of Science in Economics and Management at University of Defence (Czech Republic) in 2008. He served in different EOD related commanding as well as staff positions ranging from platoon up to brigade level of command. In 2013, He was assigned to the national EOD Technical Information Centre as a deputy head of the EOD operations department, later on as a chief of the EOD information section. In 2018, he was asigned as national representative to the EOD Centre of Excellence, Slovakia for the position senior EOD officer at the Education&Training department. He was deployed in 2011 in Afghanistan, FOB Shank as an EOD detachment commander. 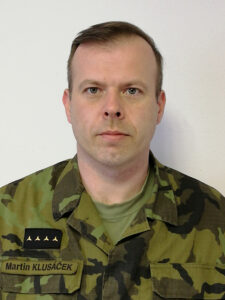