Cpt. Daniele DEL GAUDIO was born in Rome on 26th October 1981.
He joined in the Army in 2001 as a Corporal attended the 5th Course at the Italian Military NCO Academy in Viterbo from 2002 to 2004 and he became 2nd Lt in 2006.
He is assigned to the 7th NBC Def. Regiment “CREMONA” in Civitavecchia, in 2001, 2004 and 2006, where he has employed as Platoon Leader, Deputy Coy Commander, Coy Commander and Staff Officer. In 2007 he was employed in Afghanistan as Platoon Leader under the ISAF mission, in 2009 he was employed in Lebanon as Deputy Coy Commander under the UNIFIL mission, in 2010 he was employed in Kosovo as a Liaison Officer under the KFOR mission and in 2018 he was employed in Lebanon as Mobile Training Team Leader under the MIBIL mission.
In September the 15th, 2015 he took the lead of the Technical Support Section of 7th NBC Defense Regiment in regiment staff.
Since December the 10th , 2019 he took the lead of the CBRN Specialist Support Office of 7th CBRN Defense Regiment.
He is National Representative in NATO JCBRND Capability Development Group – Physical Protection Panel and in NATO Framework Concept Nation – Cluster CBRN Protection – sub cluster Operation and Integration. 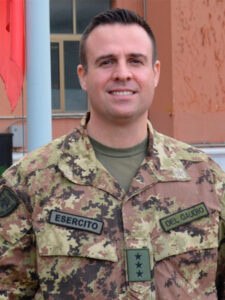