CPT Balazs Bene is a Chemical Engineer and Radiochemist specialized in radioanalytical chemistry, radiation detection, radiation protection, radiological incident and accident modeling and response.  In his current role, He is in charge of the three deployable Medical Radiobiology Advisory Teams, whose role is to assess radiological and nuclear incidents and advise incident commanders on the potential health effects of exposure, management of casualties, external, internal and wound decontamination, risk communication, plume interpretation dose estimation and assessment of other CBRN hazards in the area.  CPT Bene organizes and teaches the Medical Effects of Ionizing Radiation course globally, which educates attendees on the basics of radiation physics, health effects and management of acute radiation injuries and radiation detection and response.  He also participates with DTRA, USANCA and other DoD organizations in research projects on nuclear survivability and consequence mitigation.

CPT Bene graduated with a Master of Science from Budapest University of Technology and Economics in 2008.  He worked as a radioanalytical chemist at the National Institute of Standards and Technology in Gaithersburg, MD. Subsequently, he received his Ph.D. in 2018 at the University of Nevada, Las Vegas, in Las Vegas, NV.  CPT Bene completed two summer internships at Los Alamos National Laboratory, Los Alamos, NM and received reactor operator training on the TRIGA reactor at the University of California, Irvine. Following graduation, he worked at the Hanford Site in the State of Washington supervising the counting room at 222-S Laboratory.

CPT Bene joined the U.S. Military in 2015 as a Chemical, Biological, Radiological, Nuclear Specialist, and deployed to northern Iraq. He trained and exercised with partner nations such as Bahrein, Canada, Italy, Kuwait, Saudi Arabia, UAE, and Qatar. He commissioned in 2019 and since then he has been assigned to the Armed Forces Radiology Research Institute. 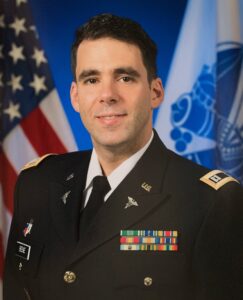