Colonel Wolfgang Karl-Heinz Reich started his career in 1982 as an Officer Cadet with the CBRN Defence Battalion 900 in Zweibrűcken. In 1987 he became a Platoon Leader in the Bundeswehr Mountain CBRN Defense Company after receiving his diploma in Economics from the Bundeswehr University in Munich, Germany.

In 1989, he became the Head of the S2 Section of the CBRN Defense Battalion 210 in Sonthofen and maintained his role for the next two years. Between the period of 1991 and 2001, he worked as a Director for two different courses at the Bundeswehr CBRN Protection and Environmental School, as well as Company Commander of the Bundeswehr CBRN Defense Battalion 705 and the KFOR Engineer Battalion in Kosovo. Followed by an appointment as Armament Staff Officer with the Bundeswehr Logistic Command in Sankt Augustin and then as a Deputy Battalion Commander of the CBRN Defence Battallion 750 and JCBRN Defence Task Force NRF 4 and NRF 7 in Hőxter. Afterwards, he gained extensive experience as a Subject Matter Expert in CBRN and WMD at the NATO Allied Command Transformation in Norfolk, Virginia, USA. 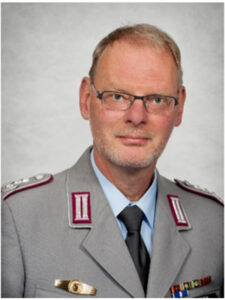