COL Todd M. Bell grew up on a farm in southeast Iowa and graduated from Keota High School in 1995. He went on to study animal science at Iowa State University with acceptance into the College of Veterinary Medicine at Iowa State in 1998. Upon graduation from veterinary school in 2002, he entered military service as a captain in the Army. His first duty assignment was at Andrews AFB in Washington, D.C. as the Officer in Charge of the Andrews AFB Veterinary Treatment Facility and the Fort Myer Veterinary Treatment Facility. Andrews AFB is home to Air Force One, and Fort Myer is co-located with Arlington National Cemetery.
Todd was then assigned to Area Support Group Kuwait in May 2004. He traveled to nine Middle Eastern countries from May 2004 to June 2005 as Officer in Charge of the Bahrain Veterinary Services, a branch of ASG Kuwait. He was responsible for the healthcare of all military working dogs in the Gulf outside of Iraq, and he performed audits on food-producing facilities throughout the Middle East. Todd was then assigned as veterinarian of the 10th Special Forces Group, Fort Carson, Colo., in August 2005, and deployed to Iraq from January-August 2006 in support of Operation Iraqi Freedom. After returning from Iraq, Todd completed a three-year residency in veterinary pathology at the Armed Forces Institute of Pathology in Washington, D.C., passing his board certification exam in 2010 to become a Diplomate of the American College of Veterinary Pathology.
During his residency, he was promoted to the rank of Major and assigned to the United States Army Medical Research Institute of Infectious Diseases at Fort Detrick, Md. Beginning in 2010, he served as a biodefense research pathologist for four years, working on vaccines and treatments for numerous military and public health threats to include anthrax, smallpox, Ebola, and other viral hemorrhagic fevers.
Todd began a Ph.D. in virology at George Mason University in 2014 and was promoted to Lieutenant Colonel in the winter of 2014. He studied Rift Valley Fever Virus, a hemorrhagic fever, during his doctoral work and developed antiviral drugs to combat this lethal virus. He finished his Ph.D. in 2017 and returned to Fort Detrick as the Military Deputy to the Science Director. Todd recently completed a command assignment as Commander of the Public Health Activity – Japan. Todd was selected for promotion during his tenure in Japan and pinned on COL on 1 December 2019.
The Bells moved from Camp Zama, Japan, to Frederick, Md., in July 2020. The Bell family includes Todd’s wife, Jill Marie, and children Eulalia Ann, Harper Patrick, and Sophia Grace. 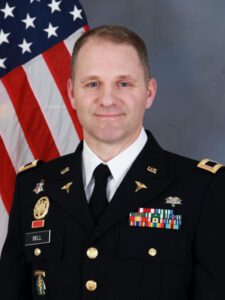