COL Harwell hails from the Midwest and was raised in the United States Army.  He is a 1999 graduate of Indiana University where he was commissioned in the U.S. Army Chemical Corps.

Throughout his career, Colonel Harwell has served in a variety of command and staff positions.  His first duty assignment was Fort Stewart, GA where he served on Battalion, Squadron, and Division staffs and as a decontamination platoon leader, with deployments to Bosnia-Herzegovina and Iraq.  He later commanded the 501st and 62nd Chemical Companies in Korea, and re-stationed the 62ndChemical Company from Korea to Joint Base Lewis-McCord, WA.  Following the activation of the 110th Chemical Battalion at Joint Base Lewis-McCord, he was the first CBRNE Response Team Leader in the unit and deploying to Iraq as the Technical Escort Detachment Commander for Combined Joint Task Force – Troy.  He then served as a JCS Intern with assignments to the Joint Staff J3 and Army G8.  Following completion of the JCS Internship Colonel Harwell served as the S3 for the 2nd Chemical Battalion and the 48th Chemical Brigade at Fort Hood, TX.  He was then assigned to the Maneuver Support Center of Excellence Capabilities Development Integration Directorate at Fort Leonard Wood, MO, where he served as the CBRN Concepts Officer.  Colonel Harwell then attended the U.S. Army School of Advanced Military Studies with a follow-on utilization tour as the Deputy Director of Plans for Special Operations Joint Task Force / NATO Special Operations Component Command – Afghanistan (SOJTF-A/NSOCC-A) at Bagram Airfield, Afghanistan.  After redeploying from Afghanistan, Colonel Harwell commanded the 22d Chemical Battalion at Fort Bliss, TX.  In 2020, Colonel Harwell returned to the Joint Staff where he served as the Deputy Chief of the CWMD Strategy, Policy and Plans Division in the J5 Deputy Director for Counter Threats and International Cooperation.  In June of 2022, COL Harwell assumed his current position as the Deputy Director of the Joint Requirements Office for CBRN Defense, a Chairman’s Controlled Activity in the Joint Staff J8.

Colonel Harwell holds a Baccalaureate of Arts in Political Science from Indiana University at Bloomington, a Master of Management from University of Phoenix, a Master of Policy Management from Georgetown University, and a Master of Military Art and Sciences from the Army Command and General Staff College’s School of Advanced Military Studies.  Most recently, he served a one-year Senior Service College Fellowship at Middlebury Institute of International Studies in Monterey, CA where his research focused on proliferation in Northeast Asia. 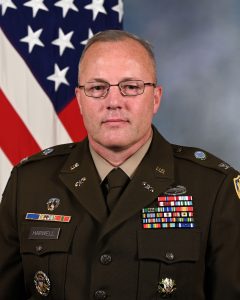