Colonel Friedrich Aflenzer began his military career on the 01 Oct 1985 as a conscript at an Austrian High Mountain Battalion.

After successfully finishing the Theresian Military Academy, he graduated as Lieutenant and CBRN Defence officer. His first assignment was Platoon Leader of a CBRN Defense Platoon at Aviation Regiment 1 in Langenlebarn, Lower Austria and then Company Commander of an Airbase management company in the same Regiment. At July 2000, he was transferred to the CBRN Defense School where he has held various positions.

Since December 2013 his current position is CBRN Defense officer at the Force Development Division in the Austrian Ministry of Defense in Vienna.
He served in different missions in Austria as well as abroad such as Mozambique, Thailand and Pakistan where he led the disaster relief mission after the earthquake in the Kashmir region. From April to October 2007 he served in KFOR at the Austrian Battalion as a Commander of the HQ-Company. In the year 2011 he was leader of the explorers and initial Mobile Training Team – Disaster Relief and CBRN Defence – In Bosnia and Herzegovina.

Until 2020 he covered the position of CBRND Officer in the Force Development Division, Federal Ministry of Defence Austria and is currently the Project Officer for CBRN Defense at the European Defense Agency in Brussels. 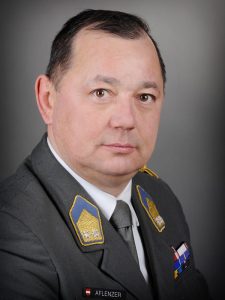