Commander of the 7th Regiment of CBRN Defence 'Cremona', Italy

Colonel Federico CECCAROLI was born in Pesaro on September 23rd, 1975. He attended the Italian Army military academy (176th course) in Modena from 1994 to 1996 and, from 1996 to 1999, he continued his military studies at the “SCUOLA DI APPLICAZIONE” in Turin as field artillery officer. In 1998 he was promoted First Lieutenant in mountain artillery within the Italian Army “Alpini” Troops. In 1999 he graduated in political sciences at Turin University.
As junior officer initially he served in the 1st Mountain Artillery Regiment of Alpine Brigade “TAURINENSE” in Fossano from 1999 to 2003 and then in the 3rd Mountain Artillery Regiment of Alpine Brigade “JULIA” in Tolmezzo from 2004 to 2009, where he covered the positions of commander of the 13th howitzer battery and ops officer of the “CONEGLIANO” artillery group.
In the academic year 2008-2009 he attended the 134th Italian Army staff course and the 16th Italian Army multidisciplinary (post-graduation) course at the “SCUOLA DI APPLICAZIONE” and, as a result of both courses, he achieved the 2nd degree Master in strategic sciences at Turin University.
In 2009 he was assigned to the Center for Defence Innovation of the Italian Defense General Staff – Military Policy and Planning Division in Rome, where he served until 2012 as staff officer in the Concept Development branch. In the academic year 2012-2013 he attended the 15th Joint Staff Course at the Center for Defence Studies in ROME at the end of which he reached the 1st degree Master in “International Strategic-Military Studies”.
From August 2013 to July 2016, he was posted to the Allied Command for Transformation (ACT) – Office of the SACT Representative in Europe (SACTREPEUR) at the NATO Headquarter in Brussels (BEL), covering the position of Strategic Plans and Policy (SPP) staff officer. From October 2016 to February 2018, he served as Commander of the “CONEGLIANO” artillery group in the 3rd Mountain Artillery Regiment of Alpine Brigade “JULIA”: during this period, for six months he acted as Maneuver Battalion Commander of the Multination Battle Group–West (MNBG-W), within the KFOR Joint Enterprise operation in Kosovo. From March 2018 to October 2020, he worked as “Field Artillery, NBC and Sensors” Section Head within the Armaments Branch of the Italian Army General Staff – Logistics Division in Rome. Finally, in September 2020 he was promoted Colonel and since the 23rd October 2020 he has been serving as the Commander of the 7th CBRN Defense Regiment “Cremona” in Civitavecchia.
In operations, Col. CECCAROLI also covered the following command and staff positions:
– platoon commander in KFOR “Joint Guardian” operation in Kosovo (Mar – Jul 2001);
– deputy company commander in KFOR “Joint Guardian” operation in Kosovo (Mar – Jul 2002);
– company commander in SFOR “Joint Force” operation in Bosnia-Herzegovina (Jun – Dec 2004);
– S3 Chief/TOC Director of the Herat Provincial Reconstruction Team (PRT) in ISAF “Presidium” operation in Afghanistan (Sept 2006 – Feb 2007). 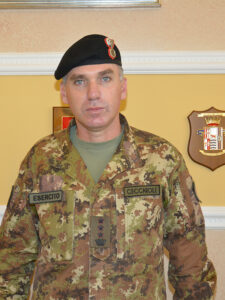