Colonel David Martínek (born in 1975) is the Director of the Joint CBRN Defence Centre of Excellence (JCBRN Defence COE), Vyškov, The Czech Republic. The Director is a principal advisor to Supreme Allied Command Transformatio (SACT) for transformation and Supreme Allied Command Europe (SACEUR) for operations in the field of CBRN defence. In this capacity, he promotes transformation in the field of CBRN defence in support of ACT, and within an approved Programme of Work (PoW), supports Sponsoring Nations (SN) and contributing partners (CP), Allied Command Operation (ACO) and other international institutions/organizations in their CBRN defence-related efforts. His working experience covers CBRN defence positions from tactical to a strategic level. He started his career as a squad leader, and CBRN Defence Officer from battalion level to Joint Force Command and the JCBRN Defence COE. His experience includes deployments in NATO operation ISAF in Afghanistan in 2008 and EU operation ALTHEA in Bosnia and Herzegovina 2011. Between 2014 – 2017 he served as the CBRN Defence Policy Staff Officer at SHAPE, Belgium. COL Martinek holds a Bachelor of Science degree in Theory of control and combat use of combat units and master’s in military chemistry. 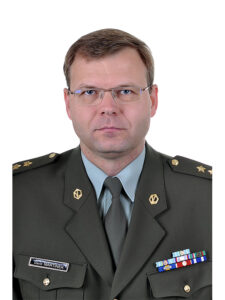