Colonel Ardanaz has served over 30 years in the Spanish Army, and ten of them have been in CBRN posts, both in CBRN Regiment and CBRN School.

During his service he has gained operational experience in Special Operations, armored warfare, Civil Affairs, and of course CBRN threats, including operational tours in Bosnia, Kosovo, North Macedonia, Afghanistan, and Lebanon.

In his current position, he oversees the development and execution of multi-Service CBRN education, and works constantly to strengthen CBRN community.

Colonel Ardanaz holds a degree in History from UNED University and a Postgraduate Course in “Civil Defence and Emergency Management” from Valencia University. 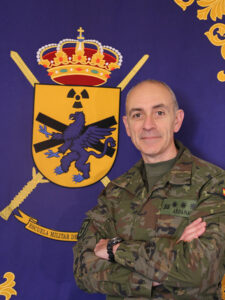