Thomas Hambach is Brigadier General of the Air Force of the German Armed Forces. He joined the German Armed Forces in 1981 and graduated with a diploma in Electrical Engineering at the German Armed Forces University in Munich. After assignments in fighter-bomber wings FBW 32, FBW 38 “Friesland” and FBW 34 “Allgäu”, he attended the General Staff Course at the Bundeswehr Command and Staff College in Hamburg from 1995 to 1997 followed by the 1st Advanced Command and Staff Course (ACSC) at the Joint Services Command and Staff College (JSCSC) in Bracknell (Great Britain). In 1998, Hambach was transferred to the MoD’s Joint Staff in Bonn serving as Military Assistant to the DCOS Pol-Mil Affairs and Arms Control. After a tour as Commanding Officer Technical Group at RecceWing 51 “Immelmann” from late 2000 to early 2003 Hambach was called back to the MoD’s Pol-Mil Department as Staff Officer (SO1) for pol-mil relations to Russia and CIS-States, later on to Asia. From 2004 to 2008 he was selected to the inner office of the German Armed Forces’ Chief of Defence as MA2 and “MA1 and Head of Office”. Subsequently, from 2008 to 2012, he was appointed Branchhead NATO Affairs before he took his chance out of the MoD and took on command of Weapon Systems Support Centre 1 in Erding in 2013. One year later he was called to the Bundeswehr Command and General Staff College in Hamburg where he served as “Dean of Faculties” and was promoted Brigadier General. After this tenure Hambach took office as Deputy Commander Bundeswehr Logistics Command in Erfurt in 2017. Since 1st October 2019, he is serving in his current post as Commander Territorial Command Bavaria. 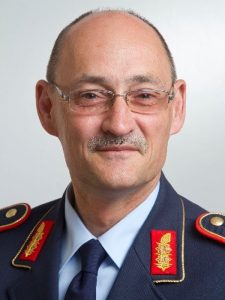