Director for Coalition Advisors and Deputy Director Of J7/9 Exercises

Brigadier General Erik Rodriguez is a native of Bucaramanga, Colombia, and currently serves as Director for Coalition Advisors and Deputy Director, J7/9 (Exercises and Coalition Affairs), United States Southern Command. His current responsibilities include oversight of U.S. Southern Command’s Civil Affairs, Humanitarian Assistance, Interagency Integration, Joint Training and Exercises, Partner Nation Advisors, Public-Private Cooperation, and Science, Technology, and Innovation programs throughout Central America, South America, and the Caribbean.
Upon graduation from the General Jose Marfa Cordova Military Academy, Brigadier General Rodriguez was commissioned a Cavalry Second Lieutenant in the Colombian Army on December 1, 1990, and has served in Counter-Guerrilla, Counter-Drug-Trafficking, and Cavalry units throughout his career.
Brigadier General Rodriguez has held various command positions, including Commander of the 16th Cavalry Battalion, Commander of the Sumapaz and the Bicentenario Task Forces, Commander of the 7th Brigade, and Commander of the Joint Task Force Achilles.
Brigadier General Rodriguez is a graduate of the U.K. Royal College of Defense Studies (RCDS). He holds a Master’s in Strategy and International Security from the King’s College London University, a Master’s in National Security and Defense from the Colombian War College, and a Bachelor degree s in Business Administration from the Nueva Granada University (UMNG) and Military Science from the Colombian Military Academy. He is also a graduate of the Colombian Intelligence and Paratroopers schools.
Brigadier General Rodriguez is a four-time recipient of the Distinguished Services in Combat Medal, has also been awarded the Presidential Victory Citation and the United States Army Meritorious Services Medal, among other awards. 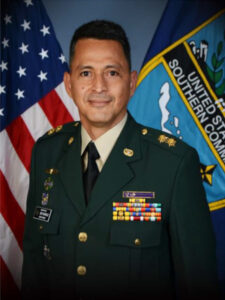