He joined the Military Academy of Modena in 1982 as Army Officer trainee, and he graduated in Strategic Sciences as well as in Diplomatic and International Sciences and related II level master’s degree courses. Moreover, he attended the “Field Artillery Officer Advanced Course” at the U.S. Army Field Artillery School of Fort Sill (Oklahoma – USA) in 1993, as well as the 60th session at the Institute for Advanced Defence Studies in 2008-2009. He spent 15 years in Artillery Units, covering different assignments.
From 2000 to 2002 he served as Commander of the 8th Field Artillery Regiment “PASUBIO” in Persano (SA). During his assignment, he commanded the “ISTRICE” task force within the “JOINT GUARDIAN” mission in Kosovo. From 2007 to 2008 he served as Commander of the 7th CBRN Defence Regiment “Cremona” in Civitavecchia. Throughout his career he served in the IV Logistics Department of the General Staff Army with different assignments, such as Staff Officer, Chief of Section and subsequently as Chief of the Armament Office (June 2009 – September 2012). After being promoted to Brigadier General from October 2012 to June 2016 he served as Director of the “Forza NEC” Program, within the IV Department of the Secretariat General of Defence. He was subsequently appointed Chief of the IV Logistics Department of the Italian Army General Staff until November 2018.
He has been the Commander of Italian Joint NBC Defence School since December 2018.

Main decorations:
• Officer of the order of merit of the Italian Republic;
• NATO medal for the “Joint Guardian” operation;
• Bronze medal of merit awarded by the Italian Red Cross for dedicated service. 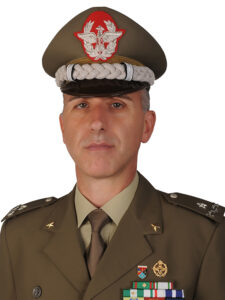