Timothy Rice is a Battalion Chief in FDNY’s HazMat Operations and currently serves as the Weapons of Mass Destruction Branch Director. His duties include planning and preparedness for large scale disasters and emergencies, including intentional acts. He has been instrumental in a number of State and Federal integration exercises and represents the Department at the City, State, Regional and Federal levels. He regularly attends meetings to both share and gain knowledge on subjects such as Radiological Dispersal Devices, Improvised Nuclear Devices and emerging CBRN threats. He has 24/7, 365 response duty for such incidents citywide.
Chief Rice started his career with the FDNY in 1994 and has worked in various ranks all over NYC. In 2009 he transferred to HazMat Operations, where he quickly became engaged on numerous projects related to CBRN/WMD and in 2012, became Captain of Engine 44, a HazMat Technician Unit. In 2014, Rice was promoted to Battalion Chief, and after a short assignment in the South Bronx, was reassigned to HazMat Operations. With increased responsibility, he has been instrumental in operationalizing a number of complex plans. In 2017, Chief Rice was the lead planner for the FDNY and Trusted Partner for Gotham Shield, FEMA Region II IND Exercise. He serves on the NFPA 472 Technical Committee, NFPA 1600 Committee and the CTTSO Technical Support Working Group. He has recently contributed to draft guidance for responders to Fourth Generation Agents (FGA’s), the NY UASI Region annual THIRA update and as a panel member at the FEMA CBRN Office 10th Anniversary celebration.
Most recently, he was primarily responsible for the implementation of the Disinfection Task Force for the FDNY in response to SARS-COV 2/COVID-19. This initiative was modeled after the FDNY HazMat Tiered Response and used to combat personnel infections and worker absentee rates to help maintain full response capability citywide. 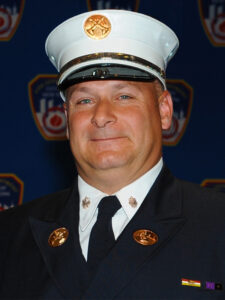