Dave Sellers serves as the Battalion Chief in charge of the Hazardous Materials Response program for the Fairfax County Fire & Rescue Department in Fairfax, Virginia. Chief Sellers has over 30 years experience in the fire service and has served in many leadership and operational capacities during his career to include paramedic, technical rescue specialist and Hazardous Materials specialist. Chief Sellers served as part of the county’s Urban Search and Rescue team (VA-TF1, US-TF1) and was a Task Force Leader for the National Medical Response Team (DC-TF1). He deployed as part of the initial response to the attack on the Pentagon on September 11, 2001, and spent over a week on Capital Hill during the Anthrax attacks in 2002, performing detection and mitigation work as part of the emergency response. Chief Sellers serves on several public safety steering committees in the Washington, DC metropolitan area and has coordinated joint HazMat/WMD training with regional federal law enforcement partners, as well as the U. S. Army’s 911th Combat Engineers at Ft. Belvoir, the U. S. Marine Corps CBIRF and the National Guard’s Civil Support Teams. 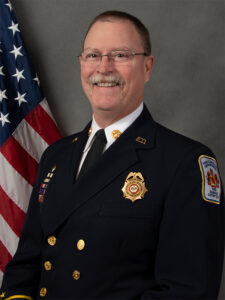